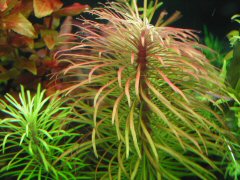 One of the myths destroyed by Sears and Conlin was that phosphorus in the aquarium should be entirely eliminated to avoid algae outbreaks. Phosphorus is needed by plants as one of the three Macros, the other two being Nitrates or Nitrogen and Potassium. The ratio that you are shooting for in a planted aquarium is roughly one part phosphorus to 10 parts nitrates to 20 parts potassium. While some have no detectable phosphorus when testing, plants that do not have access to phosphorus will not grow (Liebigs Law, if one nutrient is missing or deficient, plant growth will be poor, even if the other elements are abundant) and then algae has a chance to take over. On the other hand, some have excess amounts of phosphate, too much phosphate interferes with the metabolism of vital iron and disrupts the photosynthesis process, the result being poor plant growth. In this case either by using a phosphate based PH adjuster or possibly high levels in tap water or by overfeeding fish, plant growth is interrupted. Stop using the buffer, Kent Marine makes a buffer that does not contain phosphates found here; PH Buffer, and do water changes of up to fifty percent, use a phosphate sponge in the filter, and or better yet use an RO unit to produce water which then must be reconstituted.

Here is an interesting letter from one of our customers:

Dear Freshwater Aquarium Plants,
I solved a "Problem", which I thought that you and your readers might be interested in. I had spent oodles of money on plants for my aquarium because the previous plants would not grow and eventually they all withered away. It was then that I (finally) realized that I had a "Water Quality Problem", but I wasn't sure exactly what "it" was. I keep a close-check on my water Ph, Nitrate and Nitrite, so I assumed that if all of those test readings were satisfactory, Nitrate-0, Nitrite-0, Ph-6.8/7.0, there was no reason why my plants wouldn't grow. To keep the water quality "clear", I have always used a Carbon (Matrix) in my filters. After doing some research on the internet about my problem, I realized that my plant problem was due to heavy amounts of Phosphate. I invested in a Phosphate Test Kit and found-out (according to the test readings), that there was so much Phosphate present in my water, that the test kit's phosphate readings were off the chart! I also found-out that all carbon filter media leach phosphate, no matter what the manufacturer(s) claim. I immediately performed several 40-50% water changes and bought several pouches of Phosphate Removal products, while keeping a close eye on the Phosphate content. After about a week, the Phosphate level went from 10+ to 1.5. I than purchased all new plants, similar to the plants I had before. It's been about two weeks now, and all of my plants are green, lush and sprouting (new shoots) all-over-the-place and looks like I'm going to have to start "pruning" some of them in the near future, as they are taking-over the tank. I have hardly any algae, except a little on the side glass and no "slime", which was accumulating on almost all of the Amazon Sword leaves before I eliminated the phosphate. I now keep a small pouch of Phosphate Remover in my filter at all times, to keep the Phosphate at 0 and I no longer use any carbon filter media! I should mention that I don't like to endorse certain products, as not all aquarium conditions are exactly the same. Bad plant growth could be the fault of some other conditions that are present in the water; insufficient nutrients, etc. I have been using two products manufactured by Seachem, called, Purigen, a substitute for carbon media and Paraguard, which is designed to eliminate parasites. I use the Paraguard, because it was recommended by an experienced aquarium hobbyist, to eliminate "beard algae", which tend to grow on the plant leaves. Even the manufacturer doesn't know about this. As far as maintenance is concerned, I perform a 40% water change every 6-7 weeks and change the filter media (biological sponge, Purigen and floss) every month. I hope that (some) of my suggestions help other aquarium hobbyists with plant problems! Regards & thanks for your time.
Dave M.

So you can see that eliminating excess phosphorus helped Dave to get much better plant growth! I do not however advocate no phosphate at all as indicated by my earlier remarks. More than likely Dave was still getting some phosphates from feeding the fish that was "grabbed by the plants." I also advocate doing water changes of 25 percent minimum per week, although Daves method comes close to that.

Here is the Tom Barr estimative index for dosing a CO2 gas and high light aquarium:

Using an "estimative index" the accuracy can be as follows for teaspoons and liquids for the traces, note, further accuracy can be achieved by diluting grams of each of these nutrients into DI water and adding mls of a concentrated liquid into their tanks in place of dry powder, but thios does not gain the user much in terms of plant health and growth, which is the main reason to help improve a routine: (+ or -) 5ppm of CO2 is fine in a 20-30ppm range. (+ or -) 1ppm or so of NO3 is pretty reasonable. (+ or -) 2ppm of K+ is pretty reasonable. (+ or -) 0.2ppm of PO4 is pretty reasonable (?) (+ or -) 0.1ppm of Fe is reasonable (?) CO2 range 25-35ppm NO3 range 5-30ppm K+ range 10-30ppm PO4 range 1.0-3.0 ppm Fe 0.2-0.5ppm or higher (?) GH range 3 degrees ~ 50ppm or higher Note: PO4 and Fe are two nutrients that are difficult to assess without first assessing the other nutrients. If the NO3, K, and CO2 are in good shape, you can add a fair amount of these within a wide range. I have added to almost 3ppm of PO4 consistently week after week. Plant's response is incredible. Green spot algae has never been an issue when high PO4 levels are maintained even under high light with Anubias. Adding traces has been a focus for me lately. Many have stuck with the old standby of a residual of 0.1ppm of iron(name lt from the work done developing PMDD). Well what does this residual tell us? Does it tell us what is available to the plants? Is this enough? Do higher doses cause algae?

I personally recommend for CO2 gas injected aquariums with higher light levels, maintaining ratios according to the PH, KH chart found in our articles section for CO2 (at a 5 carbonate hardness you would be at 15 mg/l or 15 PPM'S at 7.0PH at 8 carbonate hardness you would be at 25mg/l or 25PPM'S of CO2 at 7.0PH), 6 - 8PPM for Nitrate, .05PPM for Phosphorus, 10PPM of potassium, GH (General Hardness) of 8 degrees, KH (Carbonate Hardness) of 5 degrees, PH of 7.0, light wattage of 2.5 to 3.5 watts per gallon 12 hours per day with a good reflector and a kelvin temperature of 5500 to 6700K for a broad variety of sustainable plant growth. By this I mean you can grow both soft water plants as well as varieties that like or do well in harder water (more magnesium and calcium) like swords and vallisneria. For traces, 3-5 ml's per 20 gallons two to three times a week is best, daily doses being divided from this would be even better if you have the time (more for harder water, less for softer water, so at the above levels, 3ml's three times a week per twenty gallons or 1-2 ml's per day). For lower light (1.5 to 2.5 watts per gallon) and liquid CO2 I recommend .25PPM's of phosphate, 5PPM's of nitrate, and 8PPM's of potassium, PH of 7.0. Traces should be roughly 2ml's per twenty gallons three times a week.

Here are the test kits you will need for the Phosphate and Nitrate testing, these are 60 tests each.

If you have questions about this article, send an email to Phosphate Problems? We are here to help you get your ferts balanced for a beautiful planted aquarium!
Don Matakis